Bitcoin’s price at the moment is clocking in at $10,042.25, which means that since yesterday, it is down about 2.75%. This is now the 3rd straight day that Bitcoin has headed down, and the coin’s prevailing trend over the past 14 days is down. As price is currently somewhat close below its 20 day average price of $10,965.91, we may interpret that to mean a climb up to the 20 day moving average may be needed before momentum buyers come in. On the other hand, if you are a rangebound trader seeking a range for Bitcoin to bounce between, you might find a lower boundary at $9,430.97 USD and an upper boundary at $12,500.86 USD. The currency’s market cap is now at $179.42 billion US dollars, and it’s market dominance — the percent of the entire amount of capital invested in cryptocurrencies that belong to Bitcoin — is at 64.97%. Bitcoin’s dominance level has been without a clear trend over the past two weeks, fluctuating between 63.94% and 66.32%. A dominance level without a clear trend suggests that it may still be unclear as to whether or not we will live in a world with many viable coins, or whether Bitcoin will be the “one coin to rule them all”. 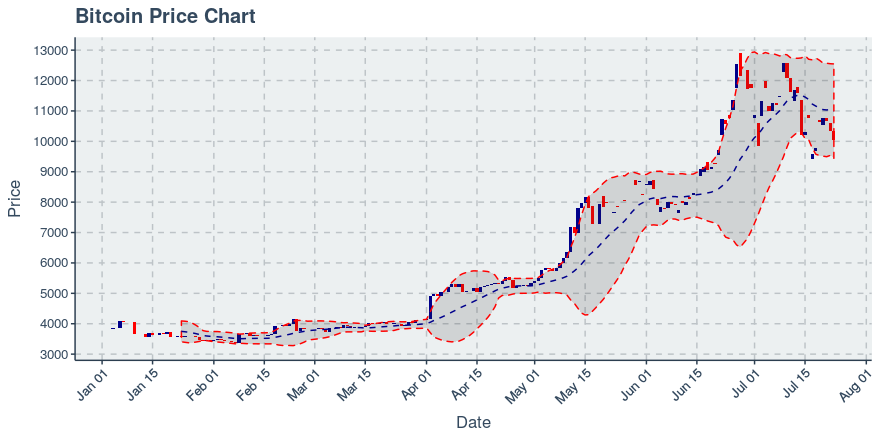 319,399 transactions were recorded on the Bitcoin blockchain yesterday. Daily transactions recorded on the Bitcoin blockchain declined by approximately -4.07% this past week; to wit, the trend is clear at this time. Bitcoin may end up functioning as a store of value if it does not increase the number of daily transactions occurring on its chain. As for Bitcoin’s transaction fees, the average transaction fee yesterday was $1.4 US dollars. The average transaction fee has been declining at a rate of about 16.52% per week, but the average amount of money sent in transactions, in US dollars, is down 10.2% week over week. Last but certainly not least, Bitcoin’s hash rate continues to bounce around on a 30 day basis, gaining about 0.24% per day. Given the unclear trend in bitcoin mining, it may be that hash rate is getting harder to interpret; this could result in the chain’s security being something to keep an eye on. As such, this might not enable Bitcoin to attract more high value transactions.